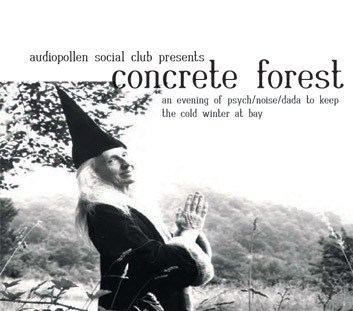 Do you remember T.A.D.? Hanging from the ceiling, swinging from beam to beam, conducting a bizarre aerobic exercise. Some people thought he was going to die: it was thrilling. There was a band playing below—was it Blank Realm? Joel Stern? Or was it simply T.A.D., dangling on his own? Or how about this one: when T.A.D. and Sally Golding performed with a weird giant bone that Golding had crafted, and T.A.D. danced around—completely naked, limbs akimbo—while Golding projected an animation about evolution in the background. What about when T.A.D. was moving house and he brought along his belongings, asking the audience to decide what he should keep or throw out?

And remember Jamie Hume? How he’d perform as the Year of the Sex Olympics? He’d stand on stage with a very old, beaten, classical-style guitar, with two or three strings on it, which he would delicately caress with a knife. Or he’d be stabbing the crap out of the guitar while nonchalantly reciting Joy Division lyrics, all with a stony-eyed glare. It would be over-and-out within about five minutes. He’d exit with a bow. “I think they’re some of the most incredible performances I’ve ever seen,” says musician Andrew McLellan.

Maybe you recall a woman screaming while a freestyle drum played underneath. Was it Kat Martin and Emma Ryan performing for Screamshow? It wasn’t. (It may have been Drea Lam, screaming over the top of the five male drummers surrounding her.) “We didn’t scream much,” says Martin. “Occasionally. But no, not really.” Instead Martin remembers getting on stage with a guitar and not knowing how to play it, so she “just sort of banged it”. She also remembers playing as Brainbeau and one night, mid-set, hearing a car alarm going off in the distance and the group rearranging their performance to play to the beep.

Then there was the free-jazz guitar improvisations of Yusuke Akai, the oft-applauded spoken word of Gerald Keaney, the Swedish black metal guys and their nauseating, grinding sound, accompanied by abattoir footage (“Seriously,” says Sam Pankhurst, “it turned people vegetarian.”), and the time when Leif Gifford created a newspaper maze installation, leading club-goers to a final reward: the bands Scraps and Faber Castell.

If you went to Audiopollen Social Club between 2006 and 2008 in Brisbane, when it was held out the back of the Forest, these were the kinds of happenings you’d witness. “Out the back of the Forest” is the official way of describing the venue, because it really was “out the back” of a vegan restaurant called the Forest Cafe—as well as “out the back” of a fruit grocer. Placed on Boundary Street in the inner-city suburb of West End, the events happened every Sunday night with around eighty performances in total.

A performance could mean anything: music, spoken-word, expanded cinema, improvisation, screaming, sheer antic. It was a strange utopia: gender parity, different generations converging, inclusion of people of colour, established international artists alongside people undertaking their first ever performance. When people talk about Audiopollen, the same words often filter through: anarchist, chaotic, hilarious, uncanny, community, possibility. You could call it an experimental performance night, but the word experimental can

So for almost two years, upon a large concrete platform—a fruit loading bay for trucks—there took place a social club. It occupied the space in a temporary, almost interventionist, way. Joel Stern, co-organiser and founder of the social club, puts it to me like this: “It was about—in a totally non-pejorative way—it was about creating a space for being weird and idiosyncratic.” Audiopollen took people and ideas that were ‘marginal’ and made them the centre, but with a mindset where things like ‘marginal’ and ‘centre’ ceased to exist.

The other thing everyone stresses was how organically Audiopollen happened. It was clearly an affront to conservatism and many other appalling ‘isms’, but no-one really conceived of Audiopollen in such explicit political terms (except for “scene builder” Gerald Keaney, he definitely conceived of it in such explicit political terms). But the point is that it flowed. “Never once did anyone say, ‘This is what should happen.’ It just happened. It was what was so magical about that period,” says Yusuke Akai, the co-organiser of Audiopollen, alongside Stern.

And with such organic, crazy, idyllic and Dada happenings, certainly no-one would have thought for two seconds about little niggling legalities—things that may arise when running an event that 100 to 200 people attend each week. Yet in the end it was a small technicality (which, as rumour has it, surfaced courtesy of a manager of a rival music venue) that would put an end to Audiopollen’s time out the back of the Forest.

But, until then, it was a strange, rotten-fruit-smelling paradise…