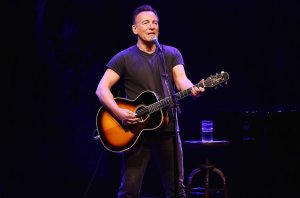 American rock icon Bruce Springsteen begins his latest live album with a list: “DNA, your natural ability, the study of your craft, development of and devotion to an aesthetic philosophy, balls, naked desire for fame, love, admiration, attention, women, sex, a buck.” For Springsteen it’s these things, alongside a fire in your belly, which are good accomplices when singing rock songs to 80,000 people. Yet when he relays this list, he’s not performing for thousands; instead, he’s standing in a theatre in New York City for his show Springsteen on Broadway. Now, after selling out 236 consecutive shows since October 2017, it has arrived as a 2 ½-hour-long album — and a Netflix film.

With audio taken from two performances in mid-2018, this album features a mixture of spoken introductions and songs. The songs, including hits such as Born to Run, Born in the USA and Dancing in the Dark, are sparsely performed, with Springsteen moving between guitar and piano; there’s no backing band in this quest for quiet intimacy. Yet it’s the spoken-word introductions, effectively mini monologues, that are the most absorbing. Drawing on his 2016 memoir, he precedes most songs by reflecting on aspects of his life: growing up in a small town, his relationship with his parents, the struggles of love, the Vietnam War, the energy of rock ’n’ roll and, most poignantly, what playing music for millions of people over four decades really means. Throughout these monologues, his storytelling ability is continuously compelling as he drifts between the weighty and the self-deprecating. As casual as he sounds, almost every memory or thought relayed feels meaningful, whether talking about avoiding conscription during the Vietnam War (“So I do sometimes wonder who went in my place, because somebody did”) or his talent as a seven-year-old Elvis Presley mimic.

What makes these monologues so visceral is Springsteen’s performative, poetic delivery: it’s a masterclass in inflection, pacing and rhythm, where humour is played against the gravity of serious moments. Even a single, heavy sigh seems magnificent.

The performance progresses like a great American novel: personal stories and desires are entwined with that country’s collective consciousness. Yet the meeting point of these poles is rock music, as for him reflections about “who we are” are also reflections on the freedom that rock music implies. But hasn’t the “rock moment” passed? Springsteen is, after all, now on Broadway, towing along a multi-platform Christmas release. Such cynicism would be so easy if the man himself didn’t make it so hard: when he whispers the quiet, communal, shared power of music, it truly feels believable. And the more he tells us, the more what he calls his “magic trick” comes to light: it’s not that he speaks the language of rock to millions of people, but that when he does speak, you think he’s talking only to you.