Difficult Fun | Totally Mild: How limitlessness is not a given condition 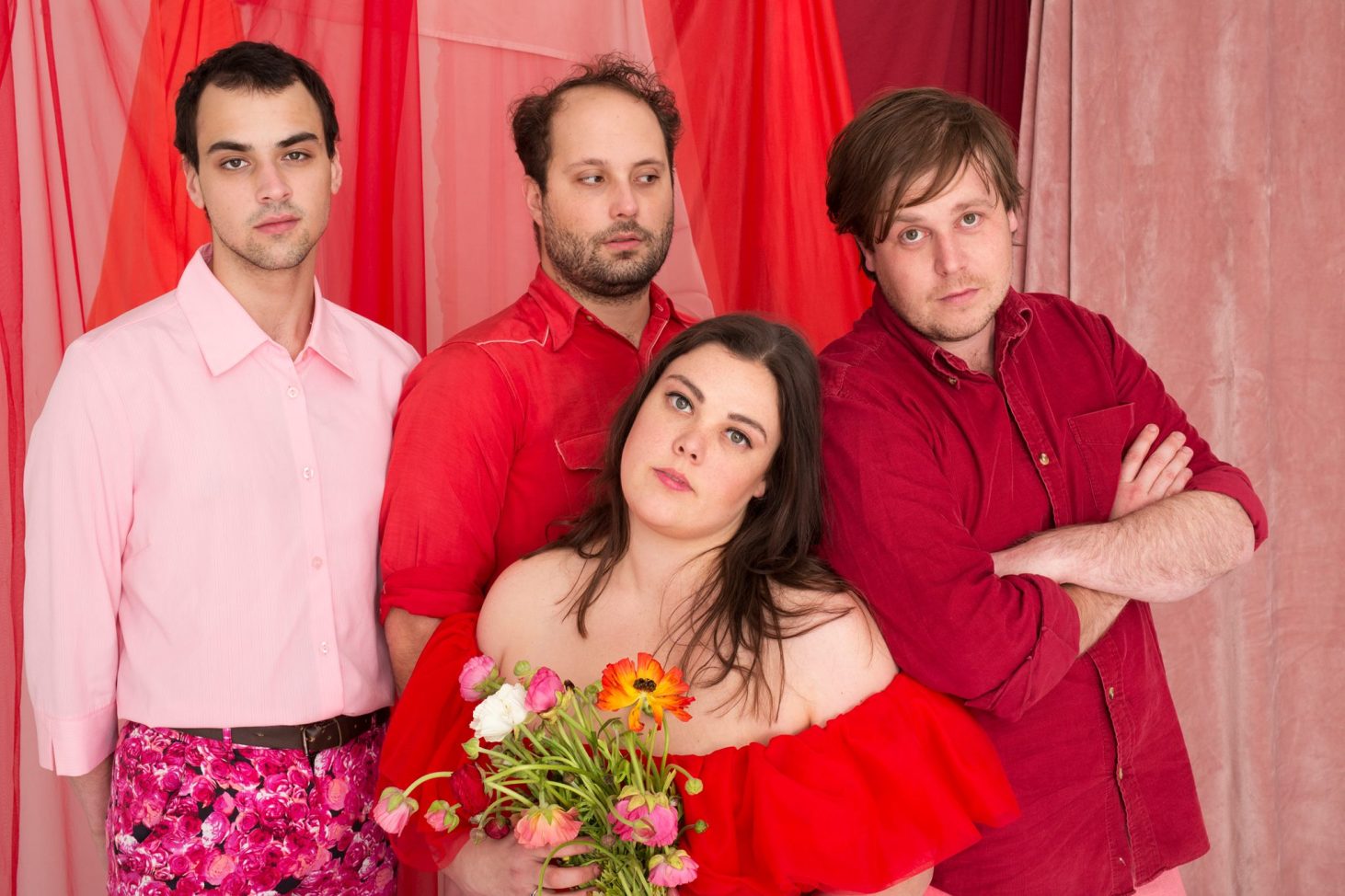 The images are strong. The album cover shows a slinking, naked woman, half-submerged in a bathtub of green water. The scene is a 1970s hotel, marred tropical respite, glamour accompanied by schmaltz, lambent lighting and high contrast. At the centre is a woman who, for whatever reason, just can’t seem to be completely happy. While she clearly has a propensity for reflections—most of this picture comes from a mirror—she can’t enjoy the pleasure of her own image, and won’t stop to look herself in the eye. In another scene—a video for one of the album’s songs—there is a different woman. This time it’s singer and songwriter Elizabeth Mitchell who, dressed like a vintage starlet, receives a phone call. “Hi. Are you still coming? Okay,” she says. It’s a classic story: she’s been set up and let down. The mundanity of it doesn’t make it hurt any less. She walks over to an opportunely placed piano, takes a seat, and begins to sing a song.

Instead of making life’s imperfect moments clearer, these two scenes remind me how having perpetually good experiences has come to define the worth of our days. There is a sharp and persistent pressure that makes us feel slighted the second our worlds slip into the negative. Couple this with the current zeitgeist of supposedly unbound human potential and upward social mobility, and you have the familiar scene from which an album by Totally Mild has emerged. Pursuing the personal, while avoiding the too-obviously political, the Melbourne band’s recent release, Her, carves careful territory where ambition is held against limits—with gender and pop music acting as the two refracting lenses.

What is immediately noticeable, however, is the lushness. Throughout the album, both musically and visually, there is a sense of vividness, loneliness, libidinous energy and wistfulness, evoking the swell of a 1960s cocktail party. For all of the light theatrics, the album is continuously understated—a contrast toyed with by lounge singers and the likes of Lana Del Ray, with who it’s quite easy to compare Mitchell. The soft glamour and skewed pop is also a carry-on aesthetic from the band’s 2015 debut album Down Time. Fronted by Mitchell, Totally Mild is a group of four with the current line up including the oft-praised guitar playing of Zachary Schneider, bassist Lehmann Smith and drummer Dylan Young (following the departure of drummer Ashley Bundang). If the entry point into Down Time was the album’s the title, the same can be said of this second release: who is her?

It’s a known artistic move that if a person wants to ask questions about their life, if they want to gain the outside perspective and toy with it, they create a character double: someone who is and isn’t themselves. In Mitchell’s world, she appears to cast herself as a stranger, the reticent ‘her’. The play between artifice and authenticity registers the continuity and discontinuity that defines the performance of a singular life. (While performance leaves no-one spared, if you don’t have a ‘normalised’ or privileged identity, you’re probably used to thinking of yourself in performative gestures anyway—you become your own voyeur.) The music press quotes Mitchell as calling Her an album about her experience of “queer domesticity” and “women.” Yet these personal resonances aren’t entirely obvious in the lyrics: they’re gestured towards, but what Her really offers is a distinguishable, three-dimensional idea of someone’s life. ‘Her’ could be Mitchell, Mitchell’s wife, another woman, you, me. Sometimes Mitchell holds her character double at arm’s length, at other moments, like the final song ‘Down Together’, she seeks unity: “And I know your body like my own / I know you’re always mine to own forever and ever.”

In Her, being a queer woman—or perhaps the general state of living today—is often talked about in terms of ambition and limits. It plays out through a mixture of false bravado and necessary self-affirmation. “I can do it on my own / I will make my heart my own,” sings Mitchell. “There’s always a sky / But I’ll say high can go,” she affirms on the sparse and woozy ‘Sky’. Yet limitlessness is not a given condition of life. So when the veiled delusions are lifted, Mitchell retreats into a combination of stagnation and content resignation: “I am nothing to stay alive for / I am nothing to die for.” Yet it remains ambivalent whether the woman on the album is independent and ambitious, or someone working herself into the ground. As Mitchell sings, “They say you’ll stop when you get tired / I keep on going / They say it’s done, it’s all been tried / They aren’t all knowing.” It would be easy to judge ‘her’ as someone determined and strong, or, alternatively, someone overwhelmingly desperate to be seen as independent. The point is that she’s both.

Where this gets played out, is at home. The problem with domestic life in Her isn’t that such a life is necessarily limited, but that it’s always thought about in limits. “Queer love means making love out of new structures,” offers writer Larissa Pham. Yet Mitchell is still dealing with the old structures. In ‘Today Tonight’—an upbeat song, where the vocal lines seem to collapse of exhaustion—Mitchell sings, “Sitting in the house all day I wait for you to come home / I am strong and sensible but I don’t want to be alone.” At a surface level the song questions how to ‘play house’, and, more broadly, how to be in love, without being incapacitated. More sinisterly, it implies how the need of other people is often thought about in terms of self-shame. What makes this work so well is the tinge of self-mockery. While the woman might know better, she’ll still put herself in vulnerable—sometimes stupid, sometimes painful—situations. Yet this is an album that also changes its mind about things. So in other songs, like ‘Lucky Stars’, the company of others is a positive, wholesome way to imagine a future: “People talk about looking back / I’m looking on with you / I won’t think about any lack / I’m looking on with you.”

These are old questions and insecurities and Mitchell isn’t delusional on this front, singing, “I know what I’m feeling has all been felt before.” If limits and ambitions are imposed everywhere on Her, by others and by Mitchell herself, then the question of limits has to be thought about via the very thing that both marks this album, and also seeks to defy limits: pop music.

Somewhere between Down Time and Her, Totally Mild became increasingly mindful of the power of pop. While both albums are crafted on disjointed pop, Her heralds increasingly nuanced composition, ambitious music that attempts to dance its way to transcendence, and experimentation with bigger-budget production. The songs are cradled in crafted melodies and while every musical and vocal facet is defined, there is, for better and worse, nothing sharp—everything is soft and touchable.

While hints of female power ballads sneak through, stylistically Her also reaches back to early 60s pop. On ‘Working Like a Crow’, Mitchell leads the vocals, with the band’s male members providing the Beach Boy-style backings. Doo-wop singing styles infiltrate at unexpected moments, never lingering long enough to become naff. Meanwhile, throughout the album, the pop-influenced, woozy guitar chords sit halfway between shoe gaze and a spaghetti western: part-humour, part-ambition. The bittersweet Hawaiian-holiday-feel infiltrates Her, but it’s the beach without the party: the defiant and soaring musical moments on Her are always met with their equivalent in dark and sardonic undercurrents.

Totally Mild’s ability to flit between sincerity and playful detachment is always played upon vocally. Both vastly oceanic and subtly low-key, Mitchell’s singing shows her instinct for expression—for melody, inflection and for continuously offering her femininity in very reflective and knowing ways. She makes small, and often mundane, thoughts seem vaster than they are. While refined female voices are often written as fountains of purity, youth and sincerity, Mitchell’s self-reflexive irony dulls this: she’s captivating because she’s almost sweet.

Totally Mild’s clever use of pop is a refusal to downplay their music or talent; they never slither into a boringly adolescent fear of musical ambition, and nor do they stake their relevance on the overly localised lyrics of so many other Australian bands. They may draw upon generic pop formulas, but by trading in a combination of the expected and unexpected, of imbuing their music with enough personality and originality, Totally Mild always ensure the time invested in them is paid off: that, at the end, there is at least a sense of catharsis.

Yet catharsis is only one of pop music’s super powers. The genre has typically allowed for projections of different personalities and identities—its authenticity lies precisely in performance, and the divide between person and performer: between Mitchell and ‘her’. Pop has always created a territory where people, whether singers or listeners, indulge the sense of going beyond themselves, where denying desire is to deny something fundamentally human. Mitchell never denies that she really—really—wants. Take lines like, “People talk about us like we could have it all / I don’t think that that’s wrong” or “But here I am before you / always asking for more.” Yet she also struggles to live in a world that continuously flaunts the mythology that all desires can, and should, be gratified. In reaction, Her talks about an essential kind of freedom that’s different from the freedom to consume. Pop music may in part be a genre that’s built upon consumption, but it’s also one of the few places where a very intrinsic form of freedom and potential can be indulged—no matter how delusory the moment may seem afterward. Pop is a space where we can privately be vulnerable in a song that’s publicly shared. The form and the content of Her couldn’t support each other better.

This is the quiet politics of Totally Mild: the concerns of ambition, care, identity and desire, which sit at the heart of life today. There have been a slew of recent albums that loudly proclaim their politics and their stance; albums that, rightly so, speak from a place of truth to audiences who are desperate to be spoken to directly, by someone they identify with. Yet Her doesn’t scream its politics. The album is an understanding that not everything valuable in art must be blatantly subversive and loud—while these qualities are valuable and important, that sort of thinking can sometimes become its own conservatism.

Yet there is the question of why this album isn’t more popular—the release has been well received, but I’m surprised the fanfare wasn’t bigger. Part of me fears that it’s because Her doesn’t wear its queer feminism on its sleeve. Mitchell takes nuanced, quiet approaches that don’t easily reverberate in a world prone to ‘ally theatre’ and #metoo. For all of the album’s talk of ambition and being female, which I do take as meaningful and important, it’s the moments of self-defeating behaviour, of acting in bad conscience and admitting to disappointments, and then getting on with life, that make Her feel real.

Totally Mild – Her
Release by Chapter Music in February 2018

The original article can be found on difficultfun.com.